Rachel McCombie of Air Experiences was the first to spot the change.

Here’s an example for the UK, where over the last few days roughly 5% of ‘city’ traffic has been recorded with a postal code rather than a city name (the percentage varied by account): 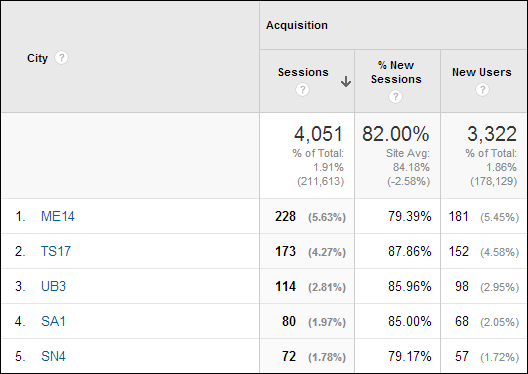 (Note that this only contains the first portion of postcodes, which gives a smallish region, but not enough data to personally identify someone.) 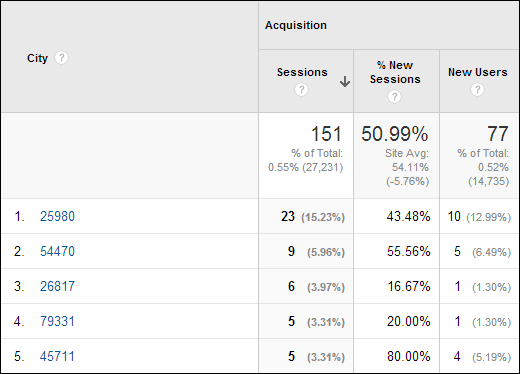 Similar data appears to now be flowing into accounts across many European countries, as pointed out by Benoît Perrotin:

The data appears to have begun trickling in on August 27th, with a much greater flow on the 28th:

There are some big positives of this, but also a few negatives:

The first caveat is, we do not know how this data is being collected, or why it seems only to cover a percentage of traffic.

The second caveat is, it’s unlikely that the data here would be completely accurate & comprehensive. That being the case, you’d only ever likely get a sample for any given area, and it would be difficult to tell whether those samples were evenly sized by region (eg. if I’m told I have 100 visits from postcode A and 200 from postcode B, does that mean I actually got double the number of visits from the latter, or just that fewer visits from the first area were correctly classified?)

The biggest caveat on all of this is that – at present – the data is being recorded in the ‘City’ field within Google Analytics. That makes things a bit of a mess: Some of the data is still recorded as city/town names, some is now recorded as postal codes. That means firstly that the data can’t be used with much confidence (eg. if you see a postal code, you have to ask “is that all of the data for that region, or is some of it grouped under a town name somewhere?)

Update: A final caveat is: Martin Macdonald spotted an oddity with an ‘ME14’ postcode appearing to be very popular. On further digging, the same postcodes seem to appear again & again among the top 5 for different accounts. Speculation (from @scottjlawson & @davecatley) is these may be large internet exchanges/providers. 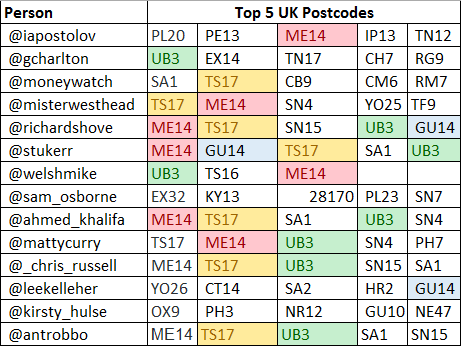 How to Find the Data

The simplest way to reach the data is to navigate to:

Alternatively, the following Google Analytics Custom Report will give you a quick snapshot of Sessions listed by Postal Code and Country:

My hope is that this data will remain in Analytics. Ideally it would be in an additional dimension (‘Postal Code’) rather than being shoe-horned into the ‘City’ field, and would cover the US and other regions.