Here are the results of a poll run on a sample of Scottish web users between 7-9 September. The poll reported – when weighted to match the Scottish internet population’s general makeup – a 53.9% ‘Yes’ vote for the question “Should Scotland be an independent country?”

The poll results were from 1,000 people in Scotland (for context, the last YouGov poll was of 1084 poeple). The poll was displayed to web users as they browsed media, mobile, arts & entertainment websites. The question was displayed to 2,873 people, from which 1,000 responded. The “Yes” result was reported with 95% significance (meaning if the same poll were run 100 times, the answer would be “Yes” on at least 95 occasions).

Weighted Results:  “Should Scotland be an independent country?

Unweighted Results: “Should Scotland be an independent country?”

The 1,000-person sample didn’t exactly match the makeup of the Scottish population (by age & gender), and therefore the above ‘weighted’ results have been altered to take that into account. For complete disclosure I’ve included the ‘unweighted’ results below, which actually lean further toward ‘Yes’. By unweighted results, I mean the results below are the ‘raw’ data, ignoring whether or not the age/gender of respondents matched the general internet users of Scotland. 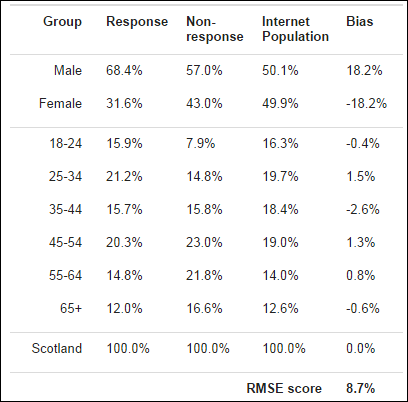 Postal Code Data Now in Google Analytics What Would Happen if you Flipped the Scotland #indyref Question?