Latest
You are here: Home / BBC Recipes – A Possible Explanation

The BBC are apparently removing thousands of recipes from their website. This has been announced, slightly clumsily, in a leak in early May, and then more officially by the BBC themselves.

This blog post takes a look at what happened, and ends by looking at the possible motivations that may have caused the BBC to communicate their plans in such an apparently clumsy way.

Phases of the announcement

There were 4 phases in the announcement that ‘BBC Food’ was going to be closed:

The original story (phases 1 & 2) explained that this was happening to ‘streamline output’ and ‘save £15m’.

That didn’t really make sense, as it costs relatively little to keep pre-existing content on a website and, naturally, people became quite angry about this. The BBC is funded by taxpayers, and license fee payers, who asked why the content they’d funded was being removed.

After lots of anger about the closing of ‘BBC Food’, they put out a clarification (‘phase 3’) above. Here’s how that was communicated by their Press Office on Twitter: 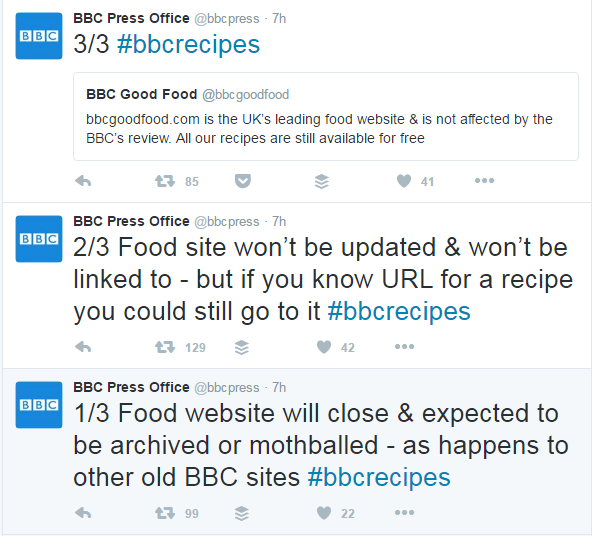 You’ll note the words ‘archived’ and ‘mothballed’ in there. Neither of those sound particularly friendly to the general public. The announcement was designed (presumably) to quell the anger of all those asking why it was being closed. By using internal jargon, it cleared up very little & simply prompted more anger & questions.

Looking at what the BBC normally do when they ‘mothball’ something, this probably would not mean that they would hide all of the recipes from Google search. It also likely does not mean they’d stick around for a short time before being deleted (there is BBC content many years old still sat there ‘mothballed’). It more likely means that the content would be excluded from the BBC’s own website search function, and that a ‘This page has been archived’ header would be tacked onto the pages: 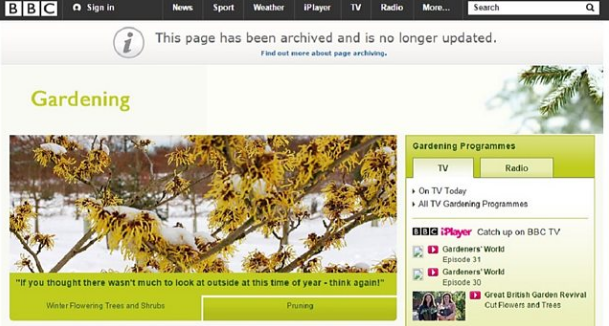 There are exceptions to this – for example, when closing ‘bbcshop.com’, they removed the entire site & redirected users across to its replacement but, in general, they do the above: Add an ‘archive’ tag, leave it available in Google search, remove it from their own search results, and leave it to sit there accessible by the public if they try hard to find it.

Despite their ‘archiving’ announcement, people continued to be angry, and a petition to ‘save’ the site hit more than 100,000 signatures. In response, the BBC clarified still further:

The obvious question is: Why didn’t they put out a straightforward announcement in the beginning. Surely they would have seen that “We’re moving most of the content from one of our sites to another” would prompt less backlash from their users than “we’re shutting down”.

It’s possible that what’s happening is this:

So why did the BBC simply announce that they were closing ‘BBC Food’, without explaining that they’d be moving content across to ‘BBC Good Food’?